The Irish FA gave permission to the Championship strugglers to approach O’Neill on Thursday and talks are understood to have progressed well.

Stoke will have to pay compensation to the Irish FA for O’Neill’s services but this is not expected to prove a stumbling block to his move.

O’Neill is expected to take charge of Stoke in Saturday’s game at Barnsley.

It is believed O’Neill will then return to Northern Ireland to take charge of his country’s final two Euro 2020 qualifiers against the Netherlands and Germany on 16 and 19 November before moving to Stoke on a full-time basis.

Former international player O’Neill, 50, has been NI boss for eight years, leading them to the Euro 2016 finals.

His expected move to the Championship club is likely to see him double his annual Northern Ireland salary of £750,000.

Stoke, bottom of the Championship table, are seeking a successor to Nathan Jones who was sacked on 1 November after just nine months in charge.

Shortly after dismissing Jones, Stoke asked to talk to Alex Neil, manager of Preston North End, but the request was turned down by their Championship rivals.

The Potters have won just two of their 15 Championship matches.

However, they have a number of well-known players such as internationals Jack Butland, Joe Allen and James McClean.

Before becoming Northern Ireland boss, O’Neill was manager of Scottish club Brechin City and then Shamrock Rovers in the League of Ireland.

Northern Ireland are currently third in their Euro 2020 qualifying group, three points behind Germany and the Netherlands.

They play both this month but, regardless of those results, a play-off place seems likely for the Northern Irish.

If O’Neill does leave the job, those likely to be linked with the role include Motherwell boss and former Northern Ireland international Stephen Robinson and the country’s under-21 manager Ian Baraclough.

At Wednesday’s announcement of his squad selection for the two games, O’Neill was asked about potential interest from Stoke.

“It is always flattering. It is better to be linked than not linked, let’s be honest,” said O’Neill, who was unsuccessfully targeted by Scotland last year.

“It it is not a distraction for me. It is something that has been ongoing for a number of years, and the focus has been on preparing for next week’s games.

“As I have always said, if and when a situation arises, then you look at that scenario at that moment in time. But right now, my focus is obviously on the two games that lie ahead.”

It’s not a worry of mine

Earlier on Thursday, Stoke’s caretaker boss Rory Delap said that he was unaware of O’Neill’s reported talks with the club, adding that he was working on the assumption he would be in charge for Saturday’s game at Oakwell.

“My focus is on the game at Barnsley, preparing the team and picking a style of play that we can win with,” said the former Republic of Ireland international.

“He was very successful at Shamrock Rovers before going into a big job at Northern Ireland,” added the former Republic of Ireland international.

“He’s got success there that they probably never thought they would end up with.

“However, I can’t reiterate enough that it’s not a worry of mine, I’ve got enough on my plate to prepare a team to win a game of football on Saturday.”

Stoke feel that they have got the man they want and throughout the day there has been a a feeling of resignation within the Irish Football Association that the O’Neill tenure was coming to a close.

His agent has been in dialogue without the club throughout the day. It’s not expected that those talks are going to prove a stumbling block between the IFA and Stoke City.

They have a crunch fixture in the Championship this weekend against Barnsley. The expectation is that Michael O’Neill will be in charge for that game. 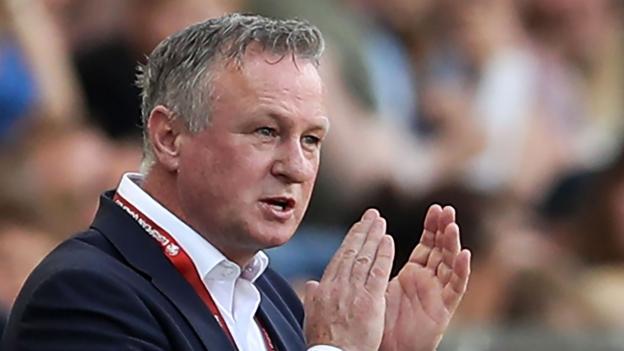