LONDON — The 39 people found dead in a refrigerated truck trailer in southeastern England were believed to be Chinese citizens, the police said on Thursday, shedding new light on what appeared to be the latest case of human trafficking leading to tragedy.

Eight of the dead are women and 31 are men, according to a statement from Essex Police. They said that each body would undergo a full coroner’s examination to identify the victim and establish the cause of death, a process that would take time.

“Our work continues today, and for the foreseeable future, to be focused on providing the victims and their loved ones with an investigation that is filled with dignity, compassion and respect for those who have died,” the statement said.

The tragedy bears striking similarities to a case in 2000 in which 58 Chinese migrants were found dead, also in a refrigerated truck, in Dover, Britain’s busiest port. Then as now, the container had been shipped across the English Channel from Zeebrugge, in Belgium.

In the 2000 case, men and women suffocated in sweltering heat after the truck’s refrigeration system was turned off and a vent closed. Amazingly, two men survived the ordeal. A Dutch driver was eventually sentenced to 14 years in prison for his involvement.

The driver of the truck found on Wednesday, a 25-year-old man from Northern Ireland, was arrested on suspicion of murder. The police have yet to confirm his identity, and as of Thursday afternoon he had not been charged. But the police said they had secured a warrant for further detention, meaning that he could remain in custody for up to 24 additional hours.

Information about the driver began to emerge on Thursday, when he was identified by elected officials and the British news media as Morris Robinson, who also went by the name Mo.

A member of the Northern Ireland assembly, Paul Berry, who lives in the same village as Mr. Robinson’s family, confirmed the driver’s identity on Thursday and said he had spoken with the family shortly after the arrest.

“Something like this which has been thrust upon them at this stage is obviously very devastating for them,” Mr. Berry said, describing the Robinsons as “very well respected” and “a lovely family.”

But he also added that the thoughts of those in the community were focused on “the families of the 39 victims who have tragically lost their lives.”

The police have yet to say anything about who the victims were, how and when they died, how long they had been in the trailer, where it originated, or who was responsible.

The truck was found early Wednesday at an industrial site in Grays, in the county of Essex, about 25 miles east of London. The local ambulance service was called out first, then summoned the police at 1: 40 a.m. All 39 victims were pronounced dead at the scene.

Attention has now turned to piecing together the movements of the refrigerated container and determining whether the dead fell victim to an operation that was illegally smuggling people into the country.

The tractor unit of the truck entered Britain through the Welsh port of Holyhead on Sunday, arriving on a ferry from Dublin, the police said. The container traveled on a ship from Zeebrugge, arriving half an hour after midnight on Wednesday at the Essex port of Purfleet, where it was hitched to a truck and driven away at 1: 05 a.m., officials have said.

Belgium’s Public Prosecutor’s Office said on Thursday that it had opened an investigation. The Belgian authorities laid out a further timeline for the movements of the container, noting it had arrived in Zeebrugge at 2: 49 p.m. on Tuesday and left the port that same afternoon.

“It is not yet clear when the victims were placed in the container and whether this happened in Belgium,” the prosecutor’s office said in a statement.

Essex Police said the case was the largest murder investigation in its history. Britain’s National Crime Agency is also involved in the investigation and is working to “urgently identify and take action against any organized crime groups who have played a role in causing these deaths,” a spokesman for the agency said in a statement.

While the circumstances surrounding the deaths are still unclear, Britain has long been a destination for migrants, and smugglers have often used English Channel crossings to traffic people into the country. But migration patterns and smuggling techniques are constantly shifting, based on political developments and the changing nature of security at borders.

In recent months, Belgium has become a major center for smugglers attempting to covertly transport people into Britain, according to the National Crime Agency. The number of smugglers based there has increased since the closing of a nearby migrant camp in Dunkirk, France, in March 2017.

Most covert transport methods pose significant safety risks: Migrants often travel in shipping containers or commercial vehicles that are transported by truck, rail or ferry, or cross the channel on small boats.

Organized gangs frequently smuggle people in hard-sided trucks like the one in Essex, while small-time traffickers tend to use soft-sided trucks, the agency said.

Chinese consular staff were rushing to Essex on Thursday to assess the situation and press for answers, China’s consular affairs office said on the Chinese social media service Weibo.

“For such a grim humanitarian tragedy to happen under the eyes of British and Europeans, Britain and other European countries involved in this clearly have not done everything they could to protect these people from such unnatural deaths,” it said in an online editorial.

Still, China is among the worst offending countries for allowing human trafficking within its borders and the smuggling of its citizens overseas, according to the United States State Department. The Chinese government has not met minimum standards set by the United States for the elimination of trafficking “and it is not making significant efforts to do so,” according to a State Department report published in June.

Chinese citizens, smuggled illegally into more than 60 countries around the world, are forced to work in restaurants, factories and agriculture, often in overseas Chinese communities, the report said.

Women from rural areas are often lured by traffickers with false promises and then forced into prostitution. Other migrants are enticed with the prospect of jobs, and then locked away in private homes overseas and forced to work.

The Essex police said officers had searched three properties in County Armagh, Northern Ireland, on Wednesday night. As of Thursday morning, Mr. Robinson was still being held by the police.

Mr. Robinson posted often about trucking on his Facebook page, where the tractor unit of the truck where the bodies were discovered can be seen in several photos. A decal across the front of its windshield read “The Ultimate Dream.”

Some fellow truck drivers on social media raised questions about whether the driver would have known what was inside the trailer before he drove off. Using the hashtag #JusticeforMo, the driver Danny Nicholson wrote that he would often pick up “unaccompanied trailers” shipped to the United Kingdom without a cab.

“This arrest of this driver Mo, well it could have been me or any driver I know,” he wrote on Facebook.

Richard Burnett, the chief executive of Britain’s Road Haulage Association, said that a driver picking up a trailer from Europe in a British port would not typically open the container. It would have seals on it intended to remain intact until the point of delivery, he added.

For Mr. Burnett, many questions remain about how the bodies were discovered inside a container that should have been sealed, and whether Mr. Robinson himself called the authorities.

The registration of the truck should have been a major red flag for anyone in the trucking industry, he said. The tractor unit was registered in Bulgaria, but had not operated there since 2017, according to the country’s government.

“This is not illegal, but we would describe it as regulation avoidance and it’s absolutely frowned upon,” Mr. Burnett said. “This would kind of demonstrate that this is a business that doesn’t take safety and regulation seriously and is probably illicit in terms of how it goes about doing things.”

He also noted that a refrigerated container like the one the victims were found in would be incredibly risky to travel in. 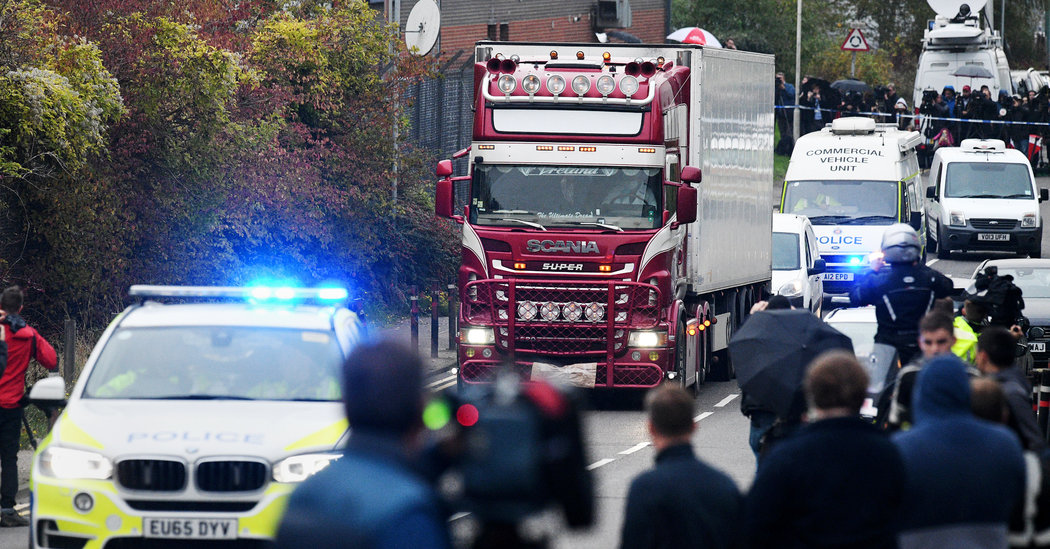